Giants are a hot topic on the internet and alternative TV shows. Ancient Aliens has mentioned giants on several episodes, arguing that they have something to do with alien visitation and manipulation of human DNA. The History Channel hosts a show called Search for the Lost Giants.

One of the proofs for giants in the ancient world is textual references about giant skeletons in classical Greek and Latin sources, including early Christian thinkers. One of the most famous is the short anecdote by the early church father Augustine (354-430 AD), who describes in his famous work, The City of God (15:9), how he had seen the bones of giants:

The large size of the primitive human body is often proved to the incredulous by the exposure of sepulchers . . . in which bones of incredible size have been found or have rolled out. I myself, along with some others, saw on the shore at Utica a man's molar tooth of such a size, that if it were cut down into teeth such as we have, a hundred, I fancy, could have been made out of it. But that, I believe, belonged to some giant.

Another example would be Quintus Sertorius (ca. 123–72 BC). Quintus was a Roman general who got tired of hearing the claim that the body of the giant Antaeus, allegedly was buried in the city of Tingis. Quintus mounted an expedition and found a huge skeleton that measured 60 cubits (ca. 90 feet) by his report. Quintus was so impressed he re-buried it instead of desecrating the remains.

Homer’s Odyssey, of course, includes the tale of Polyphemos, the one-eyed man-eating giant. Explorers like Ernle Bradford have tried to mount proof that Polyphemos was a real giant (Ulysses Found, 1964).

Are these accounts actual proof of human giants of enormous size? Could there be any other explanation?

In 2000, Adrienne Mayor, a classical folklorist and historian of ancient science, produced an important book (The First Fossil Hunters) that has a great deal of explanatory power for what’s actually behind the quotations by Augustine and Sertorius, and other similar accounts. Mayor, using ancient classical accounts, plotted out on a map the locations where giant human skeletons were supposedly found. She then overlaid a map marked with the locations of the discovery of the bones of dinosaurs and prehistoric mammals. Remarkably, they aligned to a high degree. 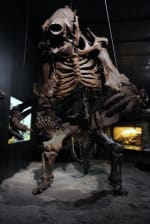 Mayor’s work showed that ancient references to what people at the time thought were skeletons of human giants were actually fossils of extinct prehistoric animals. People in antiquity simply didn’t know what they were looking at. Mayor went on to reproduce her research in the American Southwest with a follow-up book, Fossil Legends of the First Americans (2007).

If one looks at certain fossils, it’s easy to see how they could be mistaken for giant humans. The skull pictured in figure 2 could easily be mistaken for a cyclops, a one-eyed giant. But it’s actually quite ordinary---it’s the skull of an elephant without the tusks. Prehistoric mammoth skulls missing tusks are typically the source for claims of skulls of giants. The “giant” is actually the skeleton of a prehistoric giant sloth (Figure 3).

Other scholars and historians of science have actually made the same case as Mayor for mis-identifying such skulls as giants. Mammoths and elephants belong to the class of mammals known as proboscidians, a term related to their long trunks (probiscus). One example of research into how the skulls of these animals were mis-identified as skulls of giant humans is the article by James Howard, “Fossil Proboscidians and Myths of Giant Men,” Transactions of the Nebraska Academy of Sciences XII (1984):95-102. It is for this reason that specimens touted on the internet as human giant remains need to be tested for DNA. They are more than likely the bones of a prehistoric animal.

In the final analysis, there is no skeletal evidence for giants that were 20, 30, or nearly 100 feet tall. The work of classicists, paleontologists, and archaeologists has provided a coherent answer for such mis-identifications. That is not to say, however, that, like today, there were unusually tall people. In antiquity the average height for males was much less than it is today. The reasons for this have a lot to do with environment (controlling disease and pathogens) and better nutrition. When the average male was around 5.5 feet in height, anyone well over 6 feet tall up to nearly 8 feet tall (good candidates for the NBA) would have been viewed as a giant. This is the range for giants described in the Bible, like Goliath, whose height is placed at 6 feet-6 inches (“four cubits and one span”) in the Dead Sea Scrolls, the oldest texts we have for the Hebrew Old Testament.