The term Anthroposophy is usually associated with the esoteric philosophy of Rudolf Steiner (1861-1925). Steiner defined anthroposophy as “a path of knowledge that connects the spiritual in man with the spiritual in the cosmos.” He considered it to be a “spiritual science,” which would enable its practitioners to systematically pursue a path to higher knowledge. Steiner claimed that his doctrines were based on the spiritual wisdom he gained via clairvoyance, enabling him to access the “Akashic field,” a library of all knowledge which is said to exist within the etheric plane. 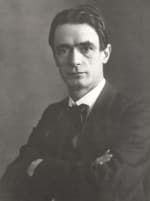 Steiner developed several complex models of what he considered to be a spiritual or occult physiology of the human organism. According to Steiner’s anthroposophy, which is outlined in his book Theosophy (1904), humanity has a tripartite nature: body, soul and spirit. The soul acts as the mediator between the mortal body and the immortal spirit.

A four-fold human nature has also been proposed by Steiner, who distinguishes between the physical body, etheric body, astral body and the “I” (Ich). The various bodies, together with the “I,” play their part in organizing and bringing harmony to our physiology. The astral body (also referred to as the soul) is responsible for our subjectivity, emotions and impulses. The role of the etheric body is to harmonize and unify, while the “I” is the eternal Self which reincarnates according to Karmic law.

Steiner also subdivides the soul into the sentient soul, the intellectual soul and the spiritual soul. As the “I” develops and transforms the three bodies (astral, etheric and physical) of the human organism, the souls undergo a gradual evolution through various stages which are also reflected in the macrocosm of human culture as a whole. We begin with the sentient soul, which is emotional, sentimental and totally preoccupied by outward observations. The intellectual soul then allows us to develop inner understanding and perception so we can conceptualize our observations of the outer world. The spiritual soul, on the other hand, is not concerned with the external world experienced by the senses, but seeks to develop a higher sense of self-consciousness and occupy a more objective perspective toward external happenings.

There is still a higher stage of physiology that humanity will evolve into in the future, whereby the “I” will have fully transformed the physical, etheric and astral bodies. As we exercise our three soul organs in their current forms, we are able to overcome the destructive and materialistic leanings of our spiritual soul.

According to Steiner’s occult physiology, the tripartite nature of humanity has a biological basis, with the region of the head being responsible for thought; the heart-lung region dealing with feelings; and the metabolic system being the center of the will. These three aspects with humanity correspond to the Trinity: Father (will), Son (feeling) and Holy Spirit (thought).

Although his philosophy had been strongly influenced by theosophical doctrines, Steiner eventually broke away from the Theosophical Society in 1913. By then, the Anthroposophical Society had been established, having taken the term “Anthroposophy” that Steiner had used in lectures to describe his own brand of esotericism. He differentiated himself further from the Theosophical Society by championing (an esoteric interpretation of) Christianity, which he considered to be a higher, more evolved form of spirituality than the older Indian tradition that many theosophists were keen on promoting.

Steiner vehemently defended the divinity of Jesus Christ, as well as His physical death and resurrection. However, Steiner’s interpretation of these key Christian doctrines departed significantly from orthodox Christianity, and share more in common with Gnosticism.

Anthroposophical Christology holds that Jesus Christ is the incarnate Logos; the spirit of the sun whose descent to the earth was for the redemption of mankind (and the earth in general). Steiner makes a distinction between the human Jesus, who was the physical vessel who received the divine Christ upon baptism. Christ’s mission is to therefore help humanity overcome the evil which has thrown their diverse “bodies” into depravity.

The third work of what are considered to be Steiner’s “basic” books, Die Geheimwissenschaft Im Umriss (Occult Science) was published in 1910 and describes the stages of the evolution of earth and humanity. It’s within this comprehensive volume that Steiner outlines his interpretation of Christ’s death and resurrection. According to Steiner, “human beings who lift themselves to the Christ Mystery can carry with them into the spiritual world what has been gained here in the world of the senses. And from the spiritual world it flows back again, forasmuch as the human beings, when they reincarnate, bring with them what the Christ Impulse has become for them in the spiritual world between death and new birth.” The Christ Impulse therefore enables humanity to overcome evil (personified as Lucifer and Ahriman) and to evolve to a higher level.

According to Anthroposophy, Lucifer is the devil whose aims are to liberate humanity and give them a sense of autonomy as well as the selfishness and ultimately death that resulted from the Fall. Lucifer plays an important role in the evolution of humanity. He gifted humanity their freedom and as the light-bearer, is the harbinger of knowledge and scientific discovery. In Steiner’s paradigm, Lucifer seeks to encourage humanity’s ambition to look upwards towards the angels and accelerates our development beyond its normal rate of expansion. Ahriman has the opposite effect on humanity’s development; stifling and contracting our development through encouraging a materialist outlook, a lust for power, and hostility towards others. Ahriman ultimately seeks to eradicate life on earth and to transform it into a machine.

Christ’s role is to harmonize these two powers, in order to bring a balance between Lucifer and Ahriman. Steiner portrayed Christ’s redemption of these two forces in the wooden sculpture, “The Representative of Mankind” (1922), which is currently displayed in the present Goetheanum in Dornach, Switzerland. Christ stands at the center of the statue, between Lucifer and Ahriman, bringing balance between the two powers. Christ therefore seeks to inhabit our “I” in order to bring harmony to our lower and higher bodies and ultimately bring transformation and reconciliation to all of humanity. This will enable us to find our spiritual and moral path, which will alchemically transform the earth into the new Heavenly Jerusalem and create a “cosmos of love.”

Steiner, like many other members of the 19th century intelligentsia, was obsessed with the concept of evolution. The esoteric revival that began with figures like Helena Petrovna Blavatsky (1831-1891) had already merged the esoteric traditions of the West with evolutionary models of the cosmos (such as in Volume II of Blavatsky’s The Secret Doctrine in 1888). Steiner’s model shared many similarities with hers. According to Anthroposophy, human physiology developed concurrently with that of our solar system, passing through several phases. Steiner employed a similar “U shape” to his evolutionary model, describing a process whereby the cosmos begins from a point of purity and descends down into corruption before ascending back up again to a new form of purity. He also used familiar theosophical terms to describe this process, even referring to each era with similar names.

During the present Earth-phase of our planetary system, there have been a series of epochs: Polarian, Hyperborean, Lemurian and Atlantean. Steiner incorporates elements of the biblical story of the Fall during the Lemurian epoch, in which humanity’s ancestors are enticed by Lucifer into becoming independent beings, using their “I” for their own selfish schemes. They ended up causing the destruction of the continent of Lemuria, with a small group escaping to the continent of Atlantis. This group would go on to evolve into the fourth “Root Race” of humanity and become initiates of the mystery knowledge.

Here we see the corrupting influence of Ahriman, who persuaded them to use the mystery knowledge they had been given by oracles for their own selfish ends, leading to their exploitation of nature. This Root Race (and continent) would also be destroyed, in this instance by way of the biblical Flood, an account which Steiner contends was inspired by the Atlantis event. The small group of initiates survived and were able to rebuild as the earth transitioned into its fifth phase. During this phase of planetary evolution, the earth passed through a number of “culture-epochs”: the ancient Indian epoch, the Persian epoch, the Egyptian epoch, the Greco-Roman epoch and the present epoch. Each era was marked by the development of a different aspect of man’s nature. For example, the Egyptian epoch was the period where the sentient soul was developed, with myths and spiritual symbols pervading the culture. The Greco-Roman era saw the development of the intellectual soul, with its shift towards philosophical thought. Steiner considers the Greco-Roman epoch as the “mid-point” of our planetary evolution, with the death and resurrection of Christ marking the point at which the “U shape” of planetary evolution begins to move its way upwards again to a new form of purity. This current epoch is therefore an opportunity for humanity to develop the spiritual soul, thanks to the emergence of the natural sciences and the beginnings of a new world marked by individual human’s “I” acting in accordance with Christ as the old religions and social structures collapse.

According to Steiner, in order for planetary evolution to occur, humanity need have multiple incarnations and therefore reincarnation and karma were key parts of his model. He described in great detail the journey the soul undergoes through the spiritual world between each bodily incarnation. As the “I” is prepared for the next life, shedding the etheric body, its astral body is purified of its past experiences before forming a new body which encompasses all of the karmic consequences of the previous life. The person’s past-life karma will affect the composition of their various new bodies, such as the health and constitution of the physical body that they will take with them into their new incarnation. Steiner again employs a Christocentric form of esotericism with his doctrine of reincarnation and karma, whereby we can atone for our past karmic sins by connecting our “I” with the presence of Christ. This allows us to transcend the tit-for-tat cycle of our past and create a new, positive karma whereby we cease to react to negative experiences from our past lives (such as seeking to mistreat those who have mistreated us in our past lives) and instead use our “I” to find common ground with our fellow man.

Steiner’s esoteric doctrine is unique among the older forms of theosophy in its reliance upon the guidance of Masters and the elitism inherent in limiting spiritual knowledge to a select few initiates. This helped lay the foundations for the New Age Movement, where people could pursue their own paths toward spiritual experiences without any special initiation or secret memberships.

Steiner’s Anthroposophy also took a holistic approach to the development of the human organism and applied his doctrine of human nature to education, providing the pedagogy for a new kind of school, the Waldorfschule (Waldorf Schools).

Steiner also used art and drama as a means of communicating his ideas, even turning to architecture with the construction of the Goethaenum (named after Goethe). After this building was destroyed, the Second Goethaenum was constructed in 1928. It remains the headquarters of the Anthroposophical movement.