Helena Petrovna Blavatsky began work on Isis Unveiled in the summer of 1875, her first major publication and the foundational text of the Theosophical movement. Published in 1877, Isis Unveiled: A Master Key to the Mysteries of Ancient and Modern Science and Theology is a massive two-volume book of over thirteen hundred pages. The book was a reaction to the dominant materialistic worldview of her contemporary scientific age, and “a plea for the recognition of the Hermetic philosophy, the anciently universal Wisdom-Religion, as the only possible key to the Absolute in science and theology.” Volume I provides an occultic perspective on science, attacking Darwin’s Origin of Species and Thomas Huxley’s Physical Basis of Matter. Blavatsky then turns her attention to Christian theology in Volume II, disputing the traditional interpretations of the Bible and giving preferential treatment to more gnostic interpretations of Scripture. 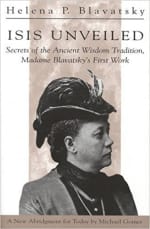 The underlying thesis of Isis Unveiled is the existence of an ancient wisdom religion from which all of the great religions derive. Blavatsky believed that humanity will once again return to this ancient religion, and proceeded to expound on its fundamental principles. Simultaneously, she attempted to assimilate modern science and Christian theology into this universal wisdom religion.

In the process of writing Isis Unveiled, Blavatsky’s first major book on occultism, Olcott observed a “wonderful psycho-physiological change” in her. Blavatsky had become aware of the presence of another being inside her, writing and speaking through her, often describing scenes and subjects of which she had no knowledge. Olcott also records how even Blavatsky’s handwriting would vary in style, a phenomenon which he attributed to her coming under the inspiration of various Masters. Blavatsky cites approximately fourteen hundred works in her book; Olcott claimed that many of those references were drawn from invisible books through Blavatsky’s clairvoyant powers. An alternative explanation was proposed by William Emmett Coleman who claimed to have discovered approximately 2,000 instances of plagiarism in Isis Unveiled, and was able to narrow down the references to approximately one hundred 19th-century books on the occult (such as the works of Eliphas Levi, Louis Jacolliot, Gougenot de Moussaux, and others).

Titled The “Infallibility" of Modern Science, the first volume of Isis Unveiled opens with a discourse on the positivist worldview of her contemporary intellectuals. She identifies what she considers to be the limitations of modern science and materialist philosophers (such as Charles Darwin and Thomas Huxley). Blavatsky described physical science as having “reached its limits of exploration.”

Blavatsky contradicts Darwin’s evolutionary model in her emanationist cosmology. Emanationism is a theory whereby all life can be traced back to an emanation from the divine, through the spirit realm, and finally into physical bodies. This involution of the human species from “higher and more spiritual natures” resulted in the descent of a “divine spark” into matter. The evolutionary process as proposed by Darwin is descriptive of the mechanism by which this process is reversed, culminating in the completion of the “grand cycle” whereby humanity becomes “physically spiritualized.”

Blavatsky describes the cosmos as tripartite; comprised of a visible, objective nature; an invisible, energy force (or “vital principle”); and, above these two, spirit, the uniquely eternal and unchanging source of all that is.

Humanity is also tripartite, consisting of an objective physical body; an astral body (soul); and an immortal spirit, which is sovereign over the other two aspects. Magic is considered to be a science concerned with the knowledge of these principles as well as their application. Magic (or “spiritual wisdom”), when properly mastered, imbues the perfected human will (the “adept”) with the ability to manipulate nature itself.

The self-controlled activity of the adepts are contrasted with that of mediums, who are considered to be “the passive instrument of foreign influences.” Blavatsky uses the example of the skill of withdrawing one’s inner man (“astral form”) from the outer man (“physical body”) to demonstrate further the gap between mediumship and adeptship. Blavatsky notes that the adept is able to perform this magical skill voluntarily, while maintaining the physical senses, as opposed to the medium’s unconscious and involuntary experience of the phenomenon. All of these magical activities are regulated by laws which operate no differently than what physical science would describe as, for example, the laws of physics.

Underlying Blavatsky’s treatment of the varied subject matter covered in Isis Unveiled is the concept of an ancient wisdom religion. This secret, occult doctrine is at the root of all the great religions of the earth. In her discussion on the book of Genesis, Blavatsky interprets the Hebrew word Elohim to refer to a group of enlightened priests. They had intended for Adam to become initiated into their priesthood but instead he partakes of the “secret doctrine” (represented by the “Tree of Knowledge” as Blavatsky refers to it) unlawfully. Blavatsky argues that the Bible is full of regurgitated Babylonian myths, which themselves can be traced back to the ancient East. The Bible is therefore completely misunderstood by the Christian Church, which is caught up in exoteric “twaddle,” incapable of grasping the esoteric truths contained deep within the text. Blavatsky prophesied that this ancient-wisdom religion will become the religion of the future.

The second volume of Isis Unveiled, entitled Theology, continues Blavatsky’s polemic against Christianity as well as her thesis of a common ancestor of the religions of the world. This second volume is replete with comparisons of Christianity with Hinduism and Buddhism, which favors the Eastern religions. Blavatsky also attacks many Christian traditions, symbols and practices, which she claims were derivatives from other religions.

Blavatsky ends the book by stating her “fervent wish has been to show true souls how they may lift aside the curtain, and, in the brightness of that Night made Day, look with undazzled gaze upon the UNVEILED TRUTH.”

Blavatsky, H.P. (1877). “Isis Unveiled: A Master Key to the Mysteries of Ancient and Modern Science and Theology”