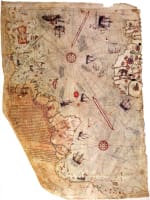 In the modern age of GPS available on every smart phone, interest in cartography—the making of maps—is rare. A notable exception is the Piri Reis map (Figure 1). It’s famous among professional cartographers and people who don’t know the first thing about geography and map making. The reason is the fantastic—and even otherworldly—claims made about the map. Some have argued that the map shows the shape of Antarctica before it was covered by ice tens of thousands of years ago. Others say it is based on the work of map makers from the advanced prehistoric civilization of Atlantis, or some other even more advanced civilization that was assisted by ancient aliens.

Not surprisingly, there is no evidence for such fantastic claims. The map is well known and has received concerted scholarly attention. As Gregory McIntosh, the leading expert on the map says, “Claims that the map depicts lands not yet known in 1513 are baseless, rely upon subjective, eye-of-the-beholder comparisons with modern maps, and ignore more coherent explanations” (McIntosh, “Tale of Two Admirals”). While it wasn’t produced by aliens, and doesn’t have anything to do with pre-Ice Age Antarctica, it’s still important.

The Piri Reis Map: Who Made It?

The Piri Reis map was discovered in 1929 in the library of Topkapi Palace in Istanbul. Its author was the Ottoman Turkish admiral and cartographer Muhiddin Piri (1465/70–1553). In 1547, Piri was promoted to the rank of Reis (admiral) and commanded Ottoman fleets in the Indian Ocean and Egypt. Harvey notes that “all the writing on the map, including the place names and some long notes, is in Arabic script, and its language is Turkish, apart from one inscription in Arabic” (Harvey, 2001). This of course is a clue to its origin. But there’s more to that story. The details are intertwined with the circumstances of its discovery. As McIntosh observes:

Throughout his naval career Piri Reis collected charts, made notes, and sketched maps of the islands and coastlines he visited. In 1521 he assembled these into a book, Kitab-i Bahriye (Book of the Sea). In 1526 he presented a revised version of Bahriye to Sultan Süleyman the Magnificent (reigned 1520–1566).

In 1528, Piri made another world map, based upon a quite different and later model than the 1513 map, which he also presented to the sultan. As with the map of 1513, the only portion to survive of this second world map was part of the depiction of the Atlantic Ocean.

In 1554, almost ninety years old and in command of the ships of the Red and Arabian Seas, Piri fell victim to the intrigues of the Ottoman court. Following his defeat in a sea battle with the Portuguese, officials in Egypt, where Piri had recently arrived, told the sultan that he had run from the battle in order to save himself and his great treasure. This treasure was the accumulated spoils of his many decades of pirating with Kemal Reis and service in the Turkish navy. The sultan ordered him beheaded, and his treasures were taken to the Topkapi Serai Palace in Istanbul. (McIntosh, “Tale of Two Admirals”)

What this means is that Piri was both a map-maker and a collector of maps. He therefore had access to the maps of other seafarers. This is crucial to understanding how the map was made.

The Piri Reis Map: How Was it Made? What Does it Show?

Comparisons of the Piri Reis map with others in the Kitab-i Bahriye (and outside that collection) show that its techniques were not unique “advanced mathematical calculations” from Atlantis or aliens. Piri Reis actually told posterity how he made it. In his recollection of his presentation of the Kitab-i Bahriye to Sultan Süleyman the Magnificent, Piri Reis wrote the following (emphasis mine):

No such map exists in our age. Your humble servant is its author and brought it into being. It is based mainly on twenty charts and mappa mundi, one of which was drawn in the time of Alexander the Great, and is known to the Arabs as Caferiye [djaʾgrafiye]. This map is the result of comparison with eight such [djaʾgrafiye] maps, one Arab map of India, four new Portuguese maps drawn according to the geometrical methods of Indian and China, and also the map of the western lands drawn by Columbus; such that this map of the seven seas is as accurate and reliable as the latter map of this region. (Brotton, p. 108, 2004)

One of the inscriptions on the Piri Reis map itself tells us essentially the same thing (emphasis mine):

The references to Columbus are crucial for answering this question. McIntosh notes that what we know as the Piri Reis Map of 1513:

... is only the surviving left-hand portion of a larger world map. The top edge displays evidence of another strip of parchment above, which would have depicted Great Britain, Iceland, Greenland, and Newfoundland. The extant fragment measures about 35 inches high by 25 inches wide (90 by 65 centimeters). The central section and right-hand (or eastern) portion of the map are missing. The complete world map probably measured about 55 inches high by 65 inches wide (140 by 165 centimeters). It is fortunate that the surviving portion is of the newly discovered regions in the Western Hemisphere, not only because it contains a copy of Columbus’s map, but also because it documents some of the era’s evolving geographical conceptions of America. (McIntosh, “Tale of Two Admirals”)

The Piri Reis Map: What About Antarctica?

McIntosh’s research once more points out the folly of identifying the Piri Reis map with a pre-Ice Age Antarctic:

Some have supposed the land shown to the south of the Atlantic Ocean to be a depiction of Antarctica, predating the continent’s discovery in the 1820s by three hundred years. This representation of prehistoric Antarctica is supposed to have been copied from ancient maps made tens of thousands, even hundreds of thousands, of years ago. Of the several writers who have made this claim, the best known is Charles Hapgood, author of Maps of the Ancient Sea-Kings (1966). But there appears to be little basis for such assertions, beyond the fact that the Piri Reis Map illustrates a land located south of the Atlantic Ocean, and Antarctica also is located south of the Atlantic Ocean. Piri was not the first or the last to show this southern continent. …

Hapgood assumed that the original source maps, resulting from an ancient survey of Antarctica, were accurate. He also assumed that the differences between the depictions on the Piri Reis Map and the depictions on these accurate (but unknown) source maps were the result of copying errors made during the compilation of the Piri Reis Map. With these two basic assumptions it was an easy matter for Hapgood to move landmasses, adjust scales, alter orientations, rearrange landforms, redraw coastlines, twist the geographical depictions, and “correct errors” on the Piri Reis Map to match his hypothetical source maps.

Additionally, to identify features on the Piri Reis Map with features on a modern map, Hapgood ignored the place-names inscribed upon the map—inscriptions that not only tell us what Piri Reis himself said the features were, but also match the place-names of many other maps from the early sixteenth century to the present. (McIntosh, “Tale of Two Admirals”)

As noted above, the Piri Reis map of 1513 depicts the Caribbean, West Indies, Central America, and the north coast of South America. His work ought not be consigned to the Internet recycle bin of ancient alien nonsense. The careful comparative research of Piri Reis, along with personal observations based on a lifetime of navigation, assured Piri Reis of his place in history:

Experts are also of the opinion that the maps drawn by him are superior to those made in Europe at that time, in both content and technique. Thus, he has made very significant contribution and he may be considered as one of the most outstanding scholars of his time. (Ayyubi, 1989)