The New Testament book of Revelation is a book about the end of the world as we know it. Because of our cultural fascination with the apocalypse and a dystopian future, even if you’ve never read a word of the Bible you’ve likely heard of the antichrist (the “beast”) and his mark, or number (666). There’s more to Revelation’s portrayal of the end of days, though. There are numerous natural disasters. The worst of those is likely what’s mentioned in this passage:

6 Now the seven angels who had the seven trumpets prepared to blow them.

8 The second angel blew his trumpet, and something like a great mountain, burning with fire, was thrown into the sea, and a third of the sea became blood.

10 The third angel blew his trumpet, and a great star fell from heaven, blazing like a torch, and it fell on a third of the rivers and on the springs of water.

11 The name of the star is Wormwood. A third of the waters became wormwood, and many people died from the water, because it had been made bitter. (Rev 8:6-11)

I’m talking about Wormwood. Revelation describes a “star” called Wormwood crashing to the earth and poisoning its water supply. Death on a massive scale ensues.

What exactly is this “star”? In recent years a popular candidate has emerged: Planet X, also known as Nibiru in internet conspiracy lore and, of course, paranormal talk radio.

As noted elsewhere on this website, belief in Nibiru (Planet X) refers to the idea that there is a rogue planet (artist’s rendition in Figure 1) in outer space at the edge of our solar system whose orbit will one day bring it crashing into earth, pretty much destroying everything.

The idea wasn’t birthed by rigorous scientific research. Rather, it’s a modern myth contrived by ancient astronaut theorist Zecharia Sitchin, who says the idea is found in ancient cuneiform tablets from Mesopotamia. In case we don’t believe Sitchin, aliens support him—they’ve been busy channeling a message of doom about Planet X through the earthling known as Nancy Lieder. I kid you not.

Planet X has been soundly debunked both by astronomers and scholars of the ancient Mesopotamian material. But that hasn’t stopped people from using the myth as an interpretive filter for the prophecy of Revelation 8:6-11. Since that passage presumably has a star from the heavens (read: outer space) crashing into earth, Planet X looks like a fulfillment of that prophecy.

Wormwood and Planet X (Nibiru): What Else Might Wormwood Be?

Rather than relying on claims of channeled information from aliens to interpret the book of Revelation, it might be wiser to read the first-century book in light of its own historical and literary context. (A radical suggestion, I know.) As it turns out, there is indeed another way to read “Wormwood”—one that has secure precedent in ancient literature of the same period that is well known for content similar to Revelation.

It’s well known among biblical studies scholars and experts in Ancient Near Eastern religion that gods or angels are often described as stars. The reasoning is simple. Angels and gods were heavenly beings, so it was natural to associate them with the celestial realm. That’s where those sorts of beings lived. The stars in the night sky (and other celestial objects) were thought to be divine beings. One scholar remarks:

The later conception that the celestial bodies are endowed with individual life, consciousness and intelligence is a further development of the observation of the movement of the stars across the heavens (see e.g. Pss 19:6–7; 104:19; Job 31:26; Eccl 1:5; Sir 43:2–12), supported by the ancient belief of the personification of stars (see e.g. the above mentioned passage of Judg 5:20) also related to Mesopotamian and Hellenistic astrological traditions. . . .

The identification of personified stars with angels of the heavenly hosts is well accepted within a totally monotheistic religious system: the stars stand in God’s presence, to the right and the left of His throne (1 Kgs 22:19; 2 Chr 18:18); they serve Him (Ps 103:21; Neh 9:6); in Sir 43:8, 10 the identification of stars with soldiers of an army is particularly evident. (Lelli, 814)

For this reason, “falling stars” is a description found within and outside the Bible (in literature of the same era) for fallen angels—divine beings under judgment. The book of 1 Enoch (ca. 3rd century BC) and later rabbinic literature both bear witness to this idea. Commenting on the Wormwood passage, one scholar explains:

[S]tars represent angelic beings in Revelation, the OT, and post-biblical Judaism (see on 1:19). These angels themselves often corporately represent earthly peoples and kingdoms, and fire typically symbolizes judgment in the Apocalypse and other related literature. . . . [The Jewish rabbinic commentary] Midr. Rab. Exod. 9.9 interprets the Exod. 7:16–18 plague on the waters, which is still in the background of Rev. 8:10, as a judgment on heavenly beings (i.e., the Nile god) who are legal agents representing sinful people, the latter of whom are likewise affected. Isa. 24:21 is adduced in support of the midrashic interpretation: “the Lord will punish the host of heaven on high and the kings of the earth on earth” . . . Similarly Midr. Rab. Exod. 23.15 affirms that both the Egyptians and their guardian angel were judged at the Red Sea). This interpretation is supported by1 En. 18:13 and 21:3, which describe the judgment of fallen angels as “stars like great burning mountains,” and1 En.108:3–6, which borrows the same image to portray the punishment of sinful people (cf. also1 En. 86–88). . . . The star is called “Wormwood,” and, as with the judgments in vv 7–9, a third of the waters that it strikes are turned into wormwood, and many people die from drinking the water. Philo, Vit. Mos. 1.100, also affirms that the Exodus plagues, including the plague on the waters, resulted in “a great multitude of people killed.” (Beale, 478-479)

Lastly, “Wormwood” is an English translation of the Greek Apsinthos (the line in Rev 8:11 literally reads: “the name of the star is Apsinth”). Apsinth is the name of a bitter herb (Figure 2). 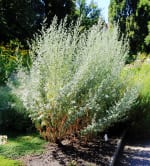 As one scholar of the book of Revelation and Greco-Roman antiquity notes: “There is no evidence that any star was called by this name in antiquity” (Aune, 521).

What this means is that, for the original writer and readers of the book of Revelation, “Wormwood” could quite easily have been interpreted as an angel under judgment—part of the general end times judgment on the wicked that (intentionally) is cast to recall the plagues against Egypt in the Old Testament. In other words, the Wormwood passage likely has nothing to do at all with literal astronomy.

Michael S. Heiser, “The Myth of a Sumerian 12th Planet: ‘Nibiru’ According to the Cuneiform Sources”